Hi, I've just set up a handful of groups and vaults, but have noticed one really weird artifact when adding new users to groups. On the mac app (not sure if it happens on other devices also), the new user sees a bunch of weird internal identifiers (see screenshot where they have been granted access to 3 vaults).

Here's how I reproduced:

At this point, the vault appears in the user's sidebar but has the weird identifier.

Weirdly, the one way I've found to "fix" this is to grant the new user individual access to the vault, and then remove it 30 seconds later. This seems to trigger the sending down of the real vault name.

Any thoughts on what is causing this? Thanks. 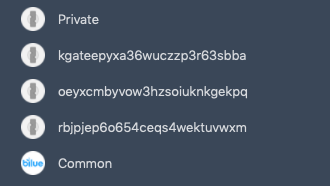