Good morning, trying to istall the latst version 7.3.652 I get the following error message and no install. Never had such problem before in years. Didn't change anything at my system vs previous installations. What can I do?! Thanks a lot. 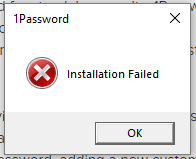