This isn't a bug so much as a difficulty with 1P7 that arises with the implementation of nested tags and which might cause some people (especially those who use tags heavily and those who have come up with their own workarounds for the absence of nested tags in previous versions) frustration with the initial upgrade.

Intuitive though it is for 1P7 to interpret / (forward slash) as a separator between parent/child tags, the inability to control whether 1P7 interprets / that way has left me with nested tagging structures that I have to manually go back to fix.

In my case, since I have purchased software through 'bundle' offers and want to keep the licenses grouped by bundle in which they were purchased, I have imported the licenses and then tagged all 1P license entries with othercsv-import-$DATE(MM/DD/YYYY) (as in the screenshot).

Even though the tag itself stays intact with the upgrade, the tag list parses the / and I end up with nested tags for each of the / (as in the next screenshot). 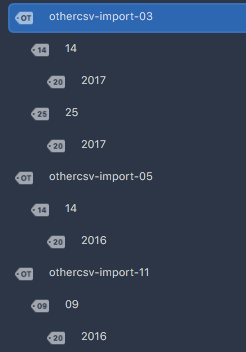 In my case this is relatively easy to fix, but for some people who have 'hacked' a nested tagging structure prior to 1P7, unless they used / as the delimiter and unless they don't use / in any date values that might be in their tags, they will end up with a mess of tags to clean up.

A better way to implement nested tags might be to broaden the delimiter to the character sequence / (that is, [space] on either side of /) or to use something more unique (like Omni Group does in OmniFocus), such as ::. Or better yet -- to allow the delimiter to be set in the 1P preferences menu so that users can adapt the implementation to their use case.