I'm having a really odd issue with syncing 1Password between my Macs and iOS. All the categories except Software Licenses are fine. There are actually a couple problems with it. The first, which has been a long-time one, is that the app icons for some of the entries don't show up in 1P on iOS even though they are present in 1P on my Macs. I instead get the generic stylized "A" app icon. It's trivial so I haven't looked into it, but it is odd.

The more important problem at hand right now came about when I couldn't get everything syncing properly (likely something I did when temporarily recovering an old backup so no worries there) so I disabled syncing across the board, then re-enabled it (iCloud) and confirmed that everything was back in sync. Everything is indeed back in sync now, except the Software Licenses category. I had been updating some of the entries, mainly just adding registration for, say version 3 of an app to the entry for version 4 of the same app so that I wouldn't have it listed twice. Those changes are syncing, but despite removing the older app version entry, it remains present in 1P on iOS. My Macs all have the complete changes synced, but iOS for some bizarre reason continues to show the older "version 3" app entry and the "version 4" app entry with the updated details.

On top of the above, in the course of trying to re-sync these, one of these Software License entries that I manually merged as above now looks like it is blank when viewed in 1P on iOS, while on macOS, all the details are present. Again, I have confirmed syncing is on, and working normally otherwise across all devices. It's JUST this category for some reason. 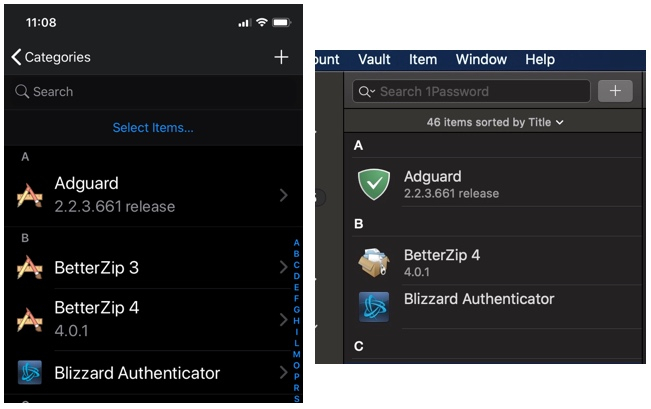